I am so excited to kick off the first post in the “Inspired” series today! Each month in this series, four different bloggers will write about a character quality I’ve chosen and a specific person in her life who demonstrates that quality. My goal for this series is that it would give encouragement and inspiration to readers and allow bloggers to share more about themselves in a unique way. The first topic I chose is one that I have been pondering a lot recently (as you know if you’re a regular reader): Authenticity.

Our first guest blogger is Jenny from Jen+Eric Generation, one of my favorite lifestyle reads (make sure you check it out!). It’s a blog dedicated to “defying mediocrity” with a slogan straight from C. S. Lewis: “We are far too easily pleased.” 🙂 Jenny is a great writer, and I was thrilled when she agreed to be a part of the series. She must have telepathic abilities, too, because she captured what I had in mind for this project exactly without having any examples before her.

Without further ado, here’s Jenny’s story about who inspires her to be authentic…

“Be
yourself” is an anthem we hear all the time. While I think everyone would
agree that ‘yourself’ is the only person you should be, the phrase is vague and
not exactly motivating in a culture that screams the ubiquitous message that we
all must look a certain way, buy specific products, say the right things, and
just overall be normal. That’s what the media tells us, anyway. But
motivational speakers, entrepreneurs, and people who generally seem content in
their own skin, tell us a different message: you have to stand out to be
successful. You’ll never be happy being someone else besides you.
I completely agree
that everyone should be their own authentic selves. Don’t we all? It makes the
world a lot more interesting. But, as the second oldest in my family and a born
rule-follower, sometimes my people-pleasing side and my side that wants to be honest,
are in competition. It’s hard to stick your neck out there and be a little
different sometimes. Confirmation is a comforting thing. But that deep
realization that confirmation from other’s is not something that should drive
us, is something I want to be really comfortable with.
When Anna asked me who
I know that really demonstrates authenticity, I had to think about it. My first
thought was, “well, all of my friends and family”. I value creativity
and marching to the beat of your own drum pretty highly, and I think most of
the people I really connect with are pretty authentic people. But then it hit
me who the most authentic person I know is. 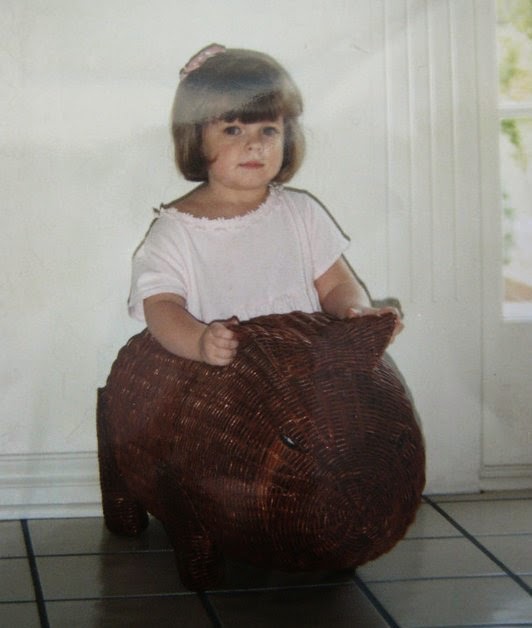 Julie being herself at a very young age
My sister Julie is the
older of my two younger sisters. We are nineteen months apart, and in a lot of
ways very similar. But in most ways, we are very different. Growing up, our
personalities balanced each other out perfectly and we got along the majority
of the time. I was the polite one never wanting to offend in social settings,
with a fake laugh that sounded pretty real. Julie never committed to something
she didn’t actually want to do, never led a guy on (even accidentally), and
couldn’t care less about her popularity status.
Today, Julie would
tell you that April Ludgate (played by Aubrey Plaza in Parks and Recreation) is
her role-model. You don’t know Julie, so that probably sounds odd if you are
familiar with the dry, totally weird, funny and sarcastic character that is
April. Julie is all of those things, but in a less socially awkward way. But
the thing about April is that she gets to be herself. And that is something
Julie has always been.
Growing up, if I was
in a heated argument debate with my older brother or
youngest sister, Julie would usually interject with nonsensical statements in
her attempt to lighten the mood. She sings Broadway songs loudly and
constantly, and rarely loses a staring contest. She is an introvert who was
heavily involved in drama in high school and college, and is completely
comfortable in front of a crowd.
In high school, she
created a youtube channel for her random monologues, rants, and musical
interpretations of her favorite songs from musicals. While the rest of the
family laughed and cringed at her very public display of what used to be only
an at-home indulgence, she steadily grew a large following of adoring fans. And
when the occasional hater left a rude comment about how idiotic or ugly she was
(ha!), she was happy for the challenge to leave brilliant responses for them
dripping in sarcasm. It made the rude people look pretty foolish, and made
Julie’s channel all the more amusing. 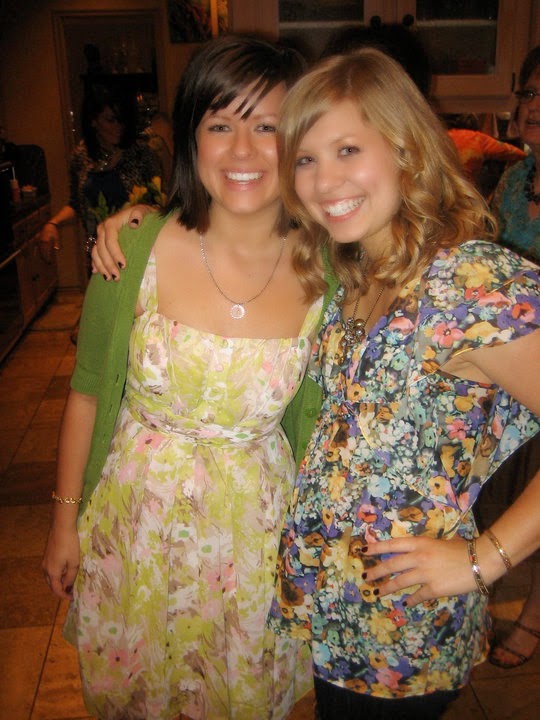 Julie and me at her wedding shower four years ago
I casually asked Julie
how she is able to not care about the approval of others, and this is what she
told me: “Being authentic is a win-win: yeah, you might put your foot in
your mouth sometimes, but it also means you are equipped for a genuine apology.
You have to be authentically considerate, too”. Isn’t that just the truth?
That is definitely something I have come to value more and more in others as I
get older, and strive for myself. Striving to be honest, in every area of life,
makes us more true to our own personalities, and frees us from caring what
other people think. And while being honest may occasionally bring out the worst
in ourselves, it will also mean we are facing our faults head on. And that is
the only way improvement is made.
Being honest with
ourselves and others is something I talk a lot about on my blog. I think
typically we think of being honest as telling the truth, but you can still tell
the truth and not be honest. Telling the whole truth, even
when it paints a less flattering picture, is difficult to do. It takes some
getting used to, even in our own thought life. For me, being authentic gets
easier when you break down your motives to yourself. Ask yourself why you are
agreeing to something, why you are spending your time this way instead of a different
way, etc.  Make a commitment to questioning your motives. And be honest in
your answers every time.
Obviously, there is a
time for being polite when it would be more natural for you to be rude. Manners
do have their place in a civil society. But we can also practice making
graciousness a more genuine part of our lives. And in that sense, we can become
more authentic in our interactions with others simply by wanting to be polite.
What might not feel natural at first can be learned, if it is a quality we want
to display. Being authentic is not always easy, but the alternative leads to
discontentment. And in the end, being honest is a lot less burdensome than
being someone else.

“Amen” to that. 🙂 Thanks so much for being here today, Jenny and for sharing Julie’s inspiration with us!

Is there someone in your life who inspires you to be yourself? Leave a comment below and make sure you check out Jen+Eric Generation. 🙂